This year has been brutal for big tech companies and the financial markets as a whole. Stocks have reversed from the 2020 euphoria to a downward trend. The below graph indicated the stock declines in big tech during 2022.

In a tighter economic climate, companies rush to cut costs and extend their runway in the midst of uncertainty. Big tech companies have reacted to stock declines by announcing layoffs and issuing hiring freezes in order to cut down on spending. The below table indicates the stock declines from the peak to recent lows across multiple big tech companies.

Big tech companies have dropped significantly from their all time highs. The decline in big tech indicates hundreds of billions of dollars in market cap being erased. Google and Amazon for example lost their trillion dollar title with recent losses.

Among big tech, Meta has seen the sharpest decline with their stock price crashing 75% from the peak to the recent November low. Below we dive into the reason for the crash and look into some technical analysis to explain the Meta stock crash.

Meta’s stock crash began in September of 2021 and has continued well throughout 2022. Meta’s market cap has gone from over 900B to 270B in the span of roughly a year.

The Meta stock crash can be attributed to several factors:

As mentioned above, the increase in interest rates has challenged the economic climate and affected many companies in 2022. The Meta stock crash is heavily impacted by rising interest rates as interest payments on their debt increases and the economic environment becomes tighter.

Meta has also seen year over year decreases in their top line revenue. In October, Meta announced a 4% revenue decline for a second consecutive quarter. Decreasing revenue has been driven by a decrease in ad spend. In 2021, Apple made privacy changes that required users to opt-in to being tracked.

This update limited the level of ad targeting and personalization for Meta which decreased effectiveness of their ads. Furthermore, when businesses face a tougher economic environment, they pull back spending on expenses such as advertising (Meta’s core business).

The Meta stock crash is also attributed to rising expenses over the past several years. These expenses include rapid increase in hiring and investments in long term bets. Meta’s Reality Labs is responsible for investments in the metaverse and VR space.

The below graph illustrates progressively larger expenses that have exceeded $10B annually starting in 2020. This long term bet has drastically increased yearly expenses with no positive return.

The Meta stock crash can also be seen by looking at the stock chart and analyzing the trends. The below graph shows the downward trend of the Meta stock over the past year. It can be observed that each attempt to reclaim a high (indicated by the black arrows), has failed, resulting in a lower high. Consistent lower highs indicate a downward trend of a stock that is struggling to maintain stability.

Furthermore, the high volume on each decline (shown on the red volume bars below) indicates the massive selling pressure on the stock.

In addition, Meta’s stock has failed to stay above the 50 day moving average (green light below) which is another indicator for a stock that is struggling to maintain a positive trend.

This article discussed the declines in big tech and the Meta stock crash. Below are the highlights:

Try out our options order flow data at no cost for a week! 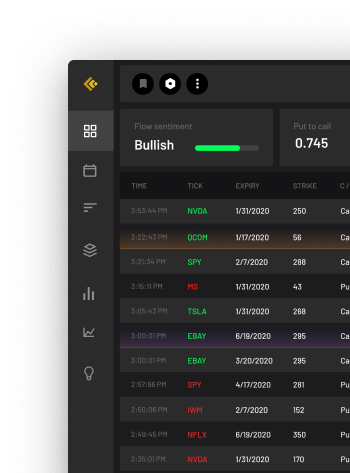